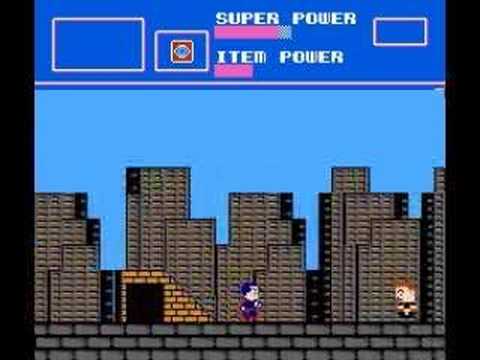 (7/16/07) Due to more interesting facts I recently stumbled on by accident as far as the music goes, I updated this vid summary.
I have to tell you, Superman for NES is one of the most terrible games I’ve ever played. But when it comes to the differences between USA and Japanese versions, they’re definitely worth bringing up.

The US version is shown first, then the JP version.

Famicom: This is definitely based on “Superman: The Movie”. Superman sprite has all facial features and expressions, and there are 8-bit versions of John Williams’ score from the film. Tracks include the Superman theme, and Superman and Lois Lane flying sequence. Also has a player register mode.

NES: Because of copyright laws in the USA, the rights to make a game from Superman: The Movie may have been too expensive for Kemco of America, so many changes had to be made. First, all facial features except for the eyes were removed from the Superman sprite. John Williams’ music was replaced with several handpicked music tracks from a Japan-only Famicom RPG called “Indora no Hikari” (Light of Indora), which is also made by Kemco.