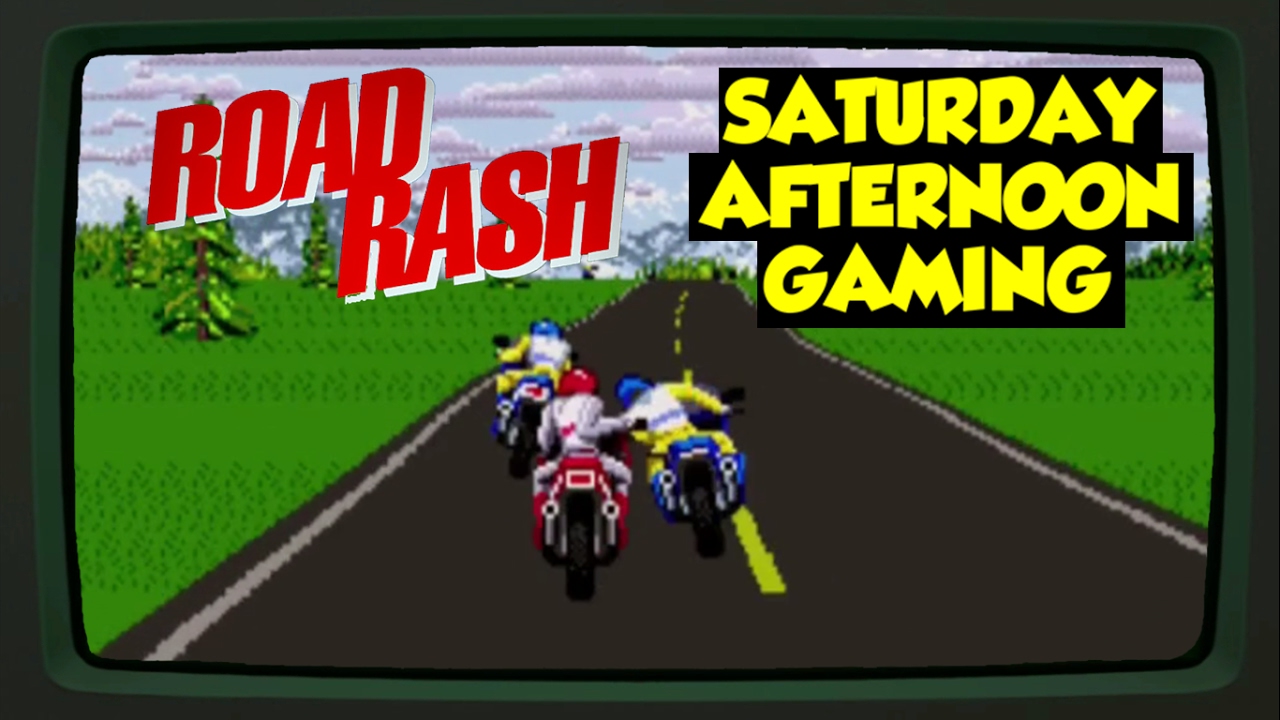 I’m Gaming Jay: Youtube gamer, let’s player, fan of retro games, and determined optimist… Normally I’m working my way through the book 1001 VIDEO GAMES YOU MUST PLAY BEFORE YOU DIE in my Let’s Play 1001 Games series. This is a great book with a ton of classic retro games but it doesn’t have everything and it’s even missing some of my favorite video games. Hence, in Saturday Afternoon Gaming, screw it, I’m just going to play whatever I want!

In this series I will be playing some of the best retro games that don’t appear in the 1001 VIDEO GAMES YOU MUST PLAY BEFORE YOU DIE book. So pull up a chair, slap on your headphones, and join me as babble aimlessly through some of my most favourite classic games! And hey, if you have ideas or suggestions feel free to leave them in the comments below. I’m always looking for more games to try! Today we play…

Road Rash is a vehicular combat racing video game developed and published by Electronic Arts for the Sega Genesis in 1991. It was ported to a variety of contemporary systems and was followed by five sequels.

An updated version of the game was made for a CD-based platforms such as Sega CD, 3DO, PlayStation, Sega Saturn and Microsoft Windows. It features a number of changes such as the ability to choose characters (with various starting cashpiles and bikes, some even have starting weapons) before playing, fleshed-out reputation and gossip systems and even full-motion video sequences to advance a plot. The updated version once again features all-California locales: The City, The Peninsula, Pacific Coast Highway, Sierra Nevada, and Napa Valley. The roads themselves now feature brief divided road sections.

The basic gameplay is similar to Sega’s Hang-On (1985) and Tatsumi’s Cycle Warriors (1991).[3] The player competes in illegal road races and must finish in either 3rd or 4th place (depending on the version being played) and up in every race of a “level” in order to proceed to the next. As these levels progress, the opponents ride faster and fight harder, and the tracks are longer and more dangerous. Placing in each race gives a certain amount of money, with higher-level races offering higher payouts. This money allows the player to buy faster bikes and parts, which are needed to stay competitive, pay for repairs if the motorcycle is wrecked, or pay for fines if one is arrested by the police. The game is over if the player is unable to pay for these repairs or fines.

Road Rash requires that players contend with various grade changes. The physics reflect the act of going up or down a hill, as well as turning while climbing; this results in the ability to launch one’s motorcycle great distances, resulting in crashes. Aside from this, Road Rash has a standard system of obstacles including street signs, trees, poles, and livestock.[4] There is also active traffic while racing against other bikers.

The player character can fight other bikers with a variety of hand weapons or simple punches and kicks. The player character can grab a weapon from another rider by timing a punch correctly. The list of weapons has grown with the games, starting from the clubs in the first Road Rash, and eventually including things like crowbars, nunchaku, and cattle prods. Whatever the weapon, successful attacks damage an opponent’s stamina, and depleting this stamina will cause a biker to wipeout which can also damage the bike; this functions much like hitting a car or other major obstacle, and it all applies to you as much as to other racers (though in most of the games, you have more stamina than opponents).

The motorcycle police officers fight the player as another opponent and serve as gameplay enforcers by culling players who fall too far behind or choose to explore the world rather than race in it. Losing a fight with an officer or being caught by one while off one’s motorcycle causes the player to be busted, ending the race.