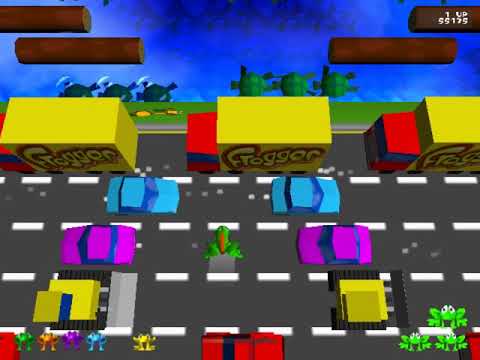 Welp, this is a bit unusual from me. This is a walkthrough of the 1997 3D update of Frogger, sometimes called “Frogger: He’s Back!” (due to the placing of the tag line on the cover). I played this game quite religiously as a kid; back in first grade, this game was pretty much my life! I had an urge to replay it recently, and somehow I still know way too much about this game a decade and a half later. I’ll admit it’s flawed, but I still love it a bunch and given that the PC version seems fairly unknown compared to the PSX version, why not?

This was run on a patched version of the game so that the music would play on an OS past Windows Me; on every Windows OS that isn’t 9x-based (including Windows 2000), a bug causes the music to simply not play at all. Note that this patch actually isn’t perfect; the music does not properly loop on this patch, and I had two options for remedying that: either pause the game every time the music finishes, or manually insert rips in myself each time the music finished. Since the latter option was less distracting, I went with it…so yes, that means every single music loop was my doing.

Retro Zone: Not much to say.

Lily Pad Zone: Holy heck, my performance fluctuated quite significantly during these levels. Bow Wow Falls and Revenge both went okay, up until the last baby frog when I started dying a bunch for really dumb reasons.

Leaf Zone: Whee, only two levels. The first one is ridiculously easy and the other is ridiculously big. Canopy Capers honestly is the only level in the game I can never seem to get down quite perfectly; though here, it was the green frog that got me, as usual. I edited out a few failed attempts at getting him.

Machine Zone: Scorching Switches is a fun level, but the other two are super forgettable. Platform Madness I ended up screwing up the last baby frog so badly that I ended up editing out a bunch of deaths. Trust me, I saved you a lot of torment.

Also, if anyone notices the score suddenly dipping in Scorching Switches and the obvious jump-cut, the game crashed on my first attempt; since I had already picked up the golden frog, I couldn’t just go back and redo it, so I spliced two recordings of the level together.

Bat Zone: Dark Dark Cavern is pretty standard fare. My first attempt at Frogger Goes Skiing went so embarrassingly that I re-did it with decidedly much better results.

Cloud Zone: Here we go, one of the most memorable zones in the game. I like most of these levels, but Time Flies is so boring, ugh. Airshow Antics is also a nightmare in difficulty, and SCREW THOSE BIRDS, AAAGH. Though actually, it wasn’t so much the birds that got me on this run, it was those helicopters which I usually don’t have too much trouble with.

Sewer Zone: Bang Bang and Boom Boom Barrel both are pretty straightforward; Slime Sliding is a bit troublesome, but overall isn’t too bad. The real evil in this zone is Uncanny Crusher though; I had to practice the oil section a LOT before I could actually get it down, it’s a giant pain. I think I was actually never able to beat Reservoir Frogs as a kid; now that I actually am mildly decent at this game, it’s not too bad, you just have to get really lucky with getting an exploding barrel on the upper section. I love the fact that we have raccoons swimming in the sewage too; I know raccoons love trash, but I don’t think they’re THIS bad about it…

Oh yeah, can I just take time to mention that I managed to go through Uncanny Crusher…WITHOUT DYING? Yeah, of all the levels I thought I’d finish without any deaths, that was NOT one of them I was expecting.

By the way, I made two editing gaffs on Reservoir Frogs. First off, I accidentally left in a failed attempt. Second, my inserted music loop starts early so the music overlaps itself. My apologies about this. It only lasts a little bit; hopefully it’s bearable enough.

Cactus Zone: The hardest zone in the game without a doubt. Cactus Point is manageable and Tumbling Valley is a joke, but the rest? All bets are off. Especially on Big Boulder Alley, good GRIEF. That level is just plain evil.

Also, I want to yank the vocal chords out of those vultures.

Tropical Trouble: A complete joke of a level. Seriously, was this supposed to be the grand finale? It’s one of the easiest levels in the game!

As for the two high score screens running on speed, that’s a bug on the PC version; the frame rate isn’t capped on these two screens so they run stupid fast on any computer made after the 90s.

Hope you enjoy watching this walkthrough! The PC version rarely gets any love on YouTube which I think is a shame, I think I like it more than the PS1 version. Either way, enjoy!