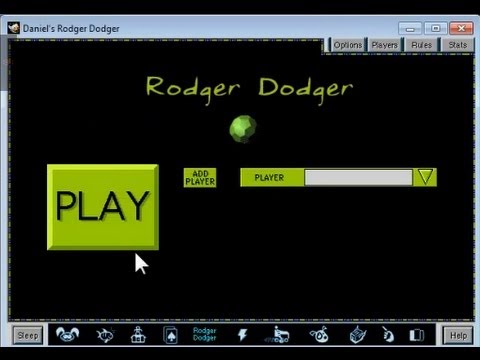 FACEBOOK :
Now for the most anticipated game of the pack : game number 5, Rodger Dodger. You take control of a sphere, whose colour shifts from purple to green to gray, through 18 different levels, making this the only other After Dark game which actually has level advancement (the other being Mowin’ Maniac). Once you’ve beaten all 18 levels, the game restarts from level 1, but the score keeps on going, so it’s like an endurance to see how many times you can beat the game. The goal in every stage is to collect all the green “things” on the screen then get to the exit indicated by the flashing green dot, which will take you to the next level. You have to do this before the timer runs out, indicated by the meter at the top of the screen, which also acts as your life meter. The meter will go down faster or slower depending on the difficulty setting and also on what enemies you come in contact with. If it runs out, you die and all the green collectibles are back, so you have to do the level all over again. The green infinity symbol and the green circle will replenish a little of your energy, but won’t fill up the bar completely. The green star gives you an extra life (you can’t have more than 4 though). If you die after collecting it, the star won’t come back, it will just be replaced by a regular green spiral, so you can’t collect the same star twice. Standing in your way are a lot of enemies, some of which kill you in one hit, while others drain your energy more or less. I don’t even know what these things are supposed to be, they’re just random shapes thrown together, so I’ll just call them “this thing” or “that thing”. So, the red-yellow square thing, the yellow triangle, the yellow sphere with two red spikes rotating around it, and the red-yellow-pentagon-shaped thing, are the ones that will not kill you upon contact, but will take away some of your health. The yellow triangle and the red pentagons with 5 yellow spikes, unlike other enemies, can also turn doors, just like the player’s sphere, so they can really overrun your game. The only difference is that the spiked things kill you instantly, while the triangle doesn’t. The red and yellow pentagon, which you only encounter in the last stage, can actually drain your life from a distance, without making contact with you, so try to stay as far as possible from it. Any other enemies not mentioned so far kill you through contact, and you have no way of defending yourself, other than running away (guess that’s why it’s called Rodger DODGER” – get it ? You dodge stuff). If you’re lucky, you CAN actually trap enemies inside a tight space by waiting for them to come next to a door and then turning that door, forcing them inside, but this is pretty hard to do considering they constantly move around in random patterns and rarely go next to any doors. Both you and the enemies can only move along a grid (you can’t go diagonally) so the controls feel a little stiff, especially when you’re being chased by an enemy and you want to get away as fast as possible. One thing I really don’t appreciate of a Sierra game is the soundtrack (if you can even call it that) : it’s just a 4 second loop, being repeated over and over – there was no excuse not to have an actual melody ! It really becomes tiring after a while so turn off your speakers or mute the game ! The game is pretty hard once you reach the later stages – by that point there’s so much shit on the screen it’s hard to even survive, let alone collect all the spirals and other objects. However, save for the repetitive music, Rodger Dodger is an addicting little time killer which will keep you playing just for the sake of seeing the next level. Give it a shot !