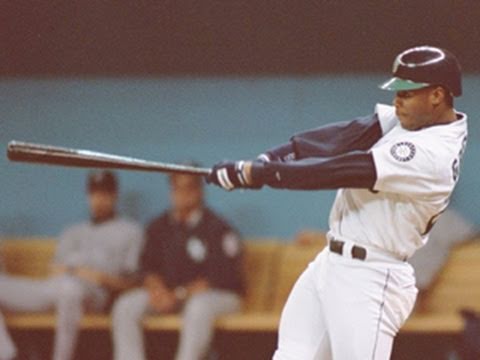 New York Yankees 5 at Seattle Mariners 6, F/11 — The Mariners had come back from a 0-2 series deficit to force a deciding Game 5, and were back home in front of a frenzied Kingdome crowd with high expectations. Yankees’ starter David Cone held a 4-2 lead going into the eighth, but surrendered Ken Griffey Jr.’s fifth homer of the series, and walked in the game-tying run with the bases loaded. Rookie fireballer Mariano Rivera arrived to strike out Mike Blowers to keep the game tied at the end of eight. In the ninth, both Game 3 starters — Randy Johnson for the M’s and Jack McDowell for the Yanks — came on in relief; both pitched two scoreless innings. When Johnson allowed a run in the 11th, and the Yanks took the field confident with their one-run lead, but Edgar Martinez doubled home two off a tiring McDowell to give the Mariners the series and a ticket to the LCS. It was Don Mattingly’s last game.